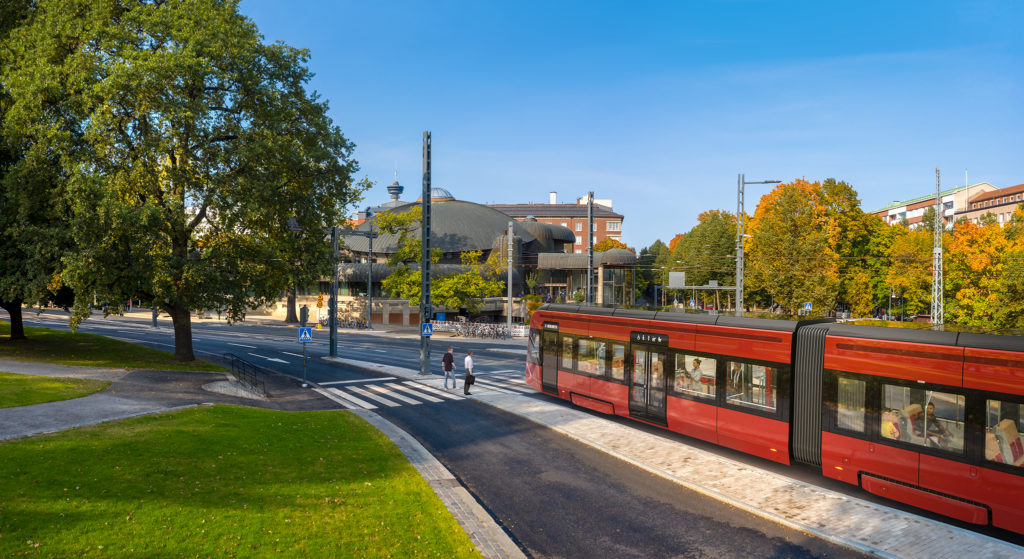 In many ways, 4 November will be an important date in Tampere Tramway’s journey towards starting operations – on 9 August next year. In addition to testing the technology of the tramway system and cars, that’s when work begins on developing the service experience.

– Ownership rights to the first two tram cars will be transferred from the manufacturer Škoda Transtech Oy to Tampere Tramway Ltd at the beginning of November. According to the lease agreement, we will then hand over the cars to the Traffic Alliance consisting of our company, Nysse and VR. This will allow VR, which is responsible for operating Tampere Tramway, to start training traffic controllers and drivers with those cars and Nysse can begin recruiting test passengers, explains CEO Pekka Sirviö from Tampere Tramway Ltd.

The phase starting now represents an opportunity to conduct practical testing related to implementing operations that were planned in the development phase. This phase includes driver training and driving practice as well as performance of test runs. The test runs will involve testing the driving times and stop functions, work shifts, occupational and traffic safety, traffic light functioning with volumes equivalent to passenger traffic, passenger service, functioning of passenger information and ticket validation equipment as well as practising exceptional situations.

– Here at VR, we’re really enthusiastic about extending our expertise to this new area. We’re a responsible public transport company that wants to grow via sustainable transportation, so the tramway is a natural step for us in terms of expansion. We’re looking forward to this new phase, which will allow us to test the operations and service concept in practice. It’s wonderful to be part of developing an even better urban transport entity for the growing city of Tampere, says Topi Simola, Senior Vice President of Passenger Services at VR.

Tests of Tampere’s tramway system began in March with a used tram car imported from Germany, and Tampere’s tram car has been a regular sight in city traffic since July. So far, the tram has travelled to the Itsenäisyydenkatu railway station tunnel. The test runs will expand to Pyynikintori in mid-November.

– In addition to the fact that the Traffic Alliance is now starting to test the entire system – from timetables to the customer service model – several other operators are also participating in the tramway system test runs. Tampere will receive a total of 19 tram cars and the car manufacturer Škoda Transtech will test their functionalities on the line. New track sections will also be gradually taken into use until actual operations begin. The Tramway Alliance is responsible for these infrastructure tests. The best way to keep up with all the test runs is by following Tampere Tramway’s website and social media channels, suggests Project Engineer and Test Run Coordinator Niina Uolamo from Tampere Tramway Ltd.

Are you interested in being one of Tampere Tramway’s test passengers? – Here’s how to apply

Traffic on Tampere Tramway will begin on 9 August 2021 and buses will move to new routes at the same time. Trial traffic on Tampere Tramway will begin on 1 April. 2021. That’s when everyone can ride the tram with Nysse ticket products. However, since tram traffic will not be regular or according to timetables, buses will continue to operate alongside the tramway on their current routes. The purpose of open trial testing is to test, for example, tram stop functions, information systems and functionality of the entire service system.

Prior to the start of open trial traffic on 1 April, Nysse will be looking for test passengers for Tampere Tramway in order to finalise tramway service. The tests may involve smooth movement from stops into the cars, travelling in a moving tram car, ease of payment, passenger information, etc.

Testing could involve the completion of a single journey or performing a certain action several times. Interviewers and planners will collect comments and experiences and control the situation. Some of the tests will be performed in groups, and these situations will comply with the current recommendations concerning health safety.

With the exception of special groups (such as wheelchair users or people with visual or physical disabilities) all types of users are needed for the tests. Tests with special groups will be coordinated by the City of Tampere’s equality coordinator, and there will be a separate announcement about this.

Nysse will select suitable test passengers on the basis of user profiles and by drawing of lots if necessary.

Apply to be a test passenger from 2 November–6 December 2020 at nysse.fi/nysselab

The Tramway Alliance: Construction of the western section of the Tampere tramway to begin – new traffic arrangements and work will be put in practice and begin in November