The Tramway Alliance: Construction of the western section of the Tampere tramway to begin – new traffic arrangements and work will be put in practice and begin in November 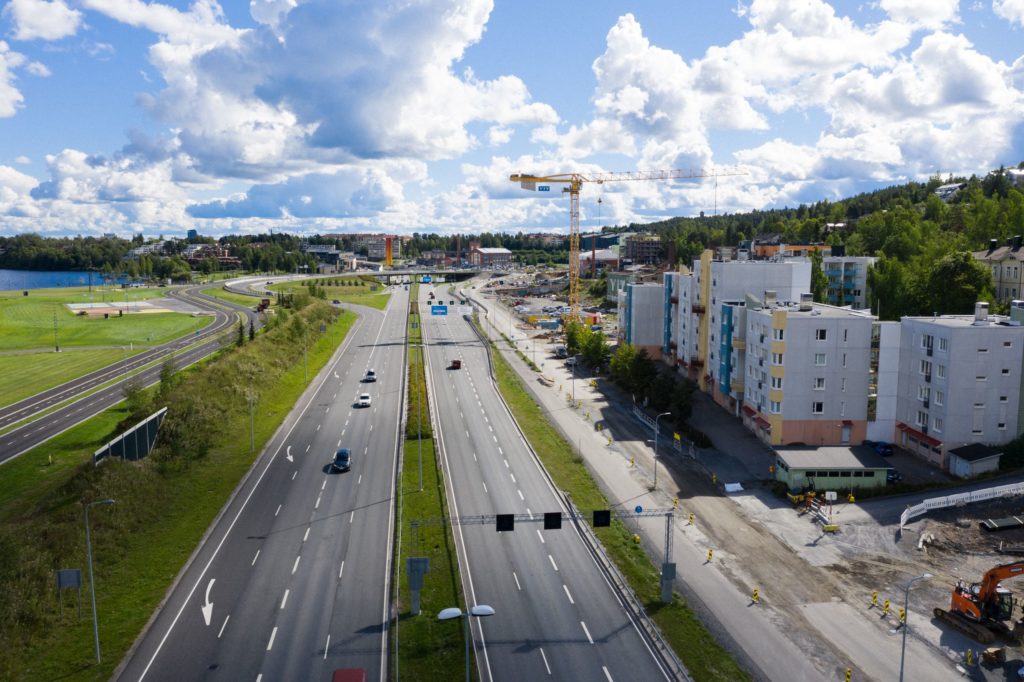 – The construction of section 2 is planned to be performed in phases by completing section 2 A between Pyynikintori and Santalahti and starting traffic operations in 2023, says Tramway Alliance Project Manager Sari Valjus.

– During construction, our goal is to plan long-term traffic arrangements for each work phase in order to make as few changes as possible and cause minimal disruption to the residents, services and traffic in the area, says Tramway Alliance Production Manager Kari Simonen.

Paasikivenkatu will have one lane towards the city centre and two westward lanes from the city centre. New alternative bike paths will be established as the work progresses. Information and signs will be published and put up according to each work phase. During construction, only one lane on Paasikiventie will lead to Paasikivenkatu, and this arrangement will remain in place when the construction of the tramway is completed.

In addition, a roundabout will be constructed in the junction of Näsijärvenkatu and Paasikivenkatu in November. According to simulations, this roundabout will ease the increased traffic of Hämeenpuisto when the Sepänkatu bridge workbegins in spring 2021. Construction of the roundabout will begin already in week 44.

New traffic arrangements will be put in practice on Paasikiventie in order to begin the construction of the new Santalahti overpass. In the first phase of construction, the outer lanes of Paasikiventie will be in use while the middle of the street is designated for work.

Lane arrangements on Pirkankatu will be put into practice due to water supply maintenance work performed close to the junction.

Traffic arrangements and roundabouts will be put into practice and constructed partially at night.

In November, once the traffic arrangements have been put into practice, construction of the tramway will begin in several locations simultaneously.

Once the lane arrangements have been put into practice, preparations to move the current Santalahti overpass and the construction of a new overpass on Rantatie will begin. The current bridge for non-motorised traffic will be temporarily moved 30 metres in the direction of the city centre for the duration of construction work in January 2021. The construction of a supporting wall on the west side of the Rantatie underpass bridge. In addition, the construction of a supporting wall on the future eastern tramway stop on Rantatie will begin close to the former matchstick factory. Electrical cables and water pipelines will also be moved in the Rantatie area away from the future tramway. The area designated to the tramway is located between Rantatie and Paasikiventie (main road 12), and there will be two tramway stops along Rantatie.

Earthworks and moving of electrical cables and water pipelines will begin on Paasikivenkatu. The work will begin in two locations, the Sepänkatu junction and the Haarla property, advancing west. The work areas are located north of Paasikivenkatu, on the side of Näsijärvi. Once the electrical cables next to the Haarla factory property have been moved next spring, the construction of a supporting wall will begin.

Traffic on the Sepänkatu bridge to be suspended in spring 2021

The bridge over the railway on Sepänkatu will be renovated in its entirety during the construction of the tramway. Because of this, preparations for the Sepänkatu bridge renovation work will be made from October 2020 to April 2021, including moving the semaphores of the railway. From spring 2021 to summer 2022, traffic on the current Sepänkatu bridge will be suspended for the duration of the renovation work.

Protective roofing will be installed underneath the Sepänkatu bridge and the current bridge over the railway will be demolished. Railway traffic operations will continue underneath the protective roofing as usual during the renovation. An entirely new bridge for all types of transport, including trams, cars, pedestrians and bikes, will be built on top of the roofing. At its widest, the bridge will be over 40 metres wide, more than two times the width of the current bridge, which is almost 16 metres wide. Construction of the bridge requires making changes to electrified railway lines and coordination with railway traffic operations.

Traffic arrangements during the construction of section 2A will affect public transport in Amuri and Santalahti. Closing down the Sepänkatu bridge will have the biggest impact as the bus lines currently operating on Sepänkatu will be directed to the city centre through Paasikivenkatu and Hämeenpuisto. Once the bridge work is finished in summer 2022, the bus lines will return to Sepänkatu.

There will be no changes in lines heading straight on Satakunnankatu or Pirkankatu, but they will pass through the work area in the Sepänkatu junctions. Bus lines on Paasikiventie (main road 12) and Paasikivenkatu may be slower than usual due to local speed limits placed on the construction site. The stops of Paasikiventie on the side of Rantatie will be moved as the site advances and, once the work is completed, one pair of bus stops will remain in Santalahti.

The bus stops on Paasikivenkatu in the Haarla curve will be removed as the site progresses according to the final plan of the area. Tampere Regional Transport and Tramway Alliance will release announcements about any exceptions to bus traffic during the work.

In addition to the tramway, the municipal engineering infrastructure of section 2 will undergo a major overhaul

The target cost of construction section 2 of the tramway is EUR 84.9 million.

– In addition to constructing the tramway, the City is requesting other work to be performed by Tramway Alliance in connection with the construction of tramway worth EUR 26.2 million. This means that the municipal engineering infrastructure between Pyynikintori and Lentävänniemi and the pedestrian and bike paths in the area will undergo a major overhaul, says Ville-Mikael Tuominen, Project Director for the Tramway Development Programme from the City of Tampere.

The work separately requested by the City to be performed in connection with the construction of the tramway include, for example, improvements in regional bike and pedestrian routes, construction of a new pedestrian bridge in Santalahti, renovation of streetlight, water pipeline, sewage and district heating network systems as well as installing fibre data connection cables. A basic improvement of Pirkankatu between Sepänkatu and Santalahdentie is also included in the contract. Pedestrian and bike paths will be completed in street-specific phases by 2024.

Section 1 of the tramway (Pyynikintori-Hervanta, Tampere University Hospital-Sori square) will be completed on schedule and traffic operations on the entire section will begin on 9 August 2021.

– “According to current estimates, the actual costs of section 1 will be at least EUR 26 million lower than the target cost. 85% of the work on section 1 has been completed, including the construction of the tramway on Hatanpään valtatie. Nearly half of the work on the tramway on Hatanpään valtatie has been completed,” says Sari Valjus.

All work on the tracks of section 1 has been completed, including the installation of 15,700 metres of double tracks over the entire length of the line. An additional four kilometres of tracks have been installed in the depot area.

– Constructed in two phases:
o 2A (Pyynikintori-Santalahti 2020–2023), traffic operations to begin in 2023
o 2B (Santalahti-Lentävänniemi) once the permit for filling a body of water for the construction of Näsisaari has legal force. Goal is to begin traffic operations in 2024
– 6,633 metres of double tracks
– 9 tramway stops and additional reservations for Näsisaari
– 7 rail switches
– 4 electricity supply station
– 7 new bridges
– 2 bridges to be renovated
– 7 supporting walls, 2 supporting wall troughs