Tampere Tramway Ltd has surveyed the opinions and attitudes of Tampere residents regarding the tramway. The first consumer study was performed in autumn 2017. A follow-up study carried out in April 2019 shows that an growing majority considers Tampere Tramway to be a useful mode of transport that will improve the city’s image and make Tampere a better place to live. 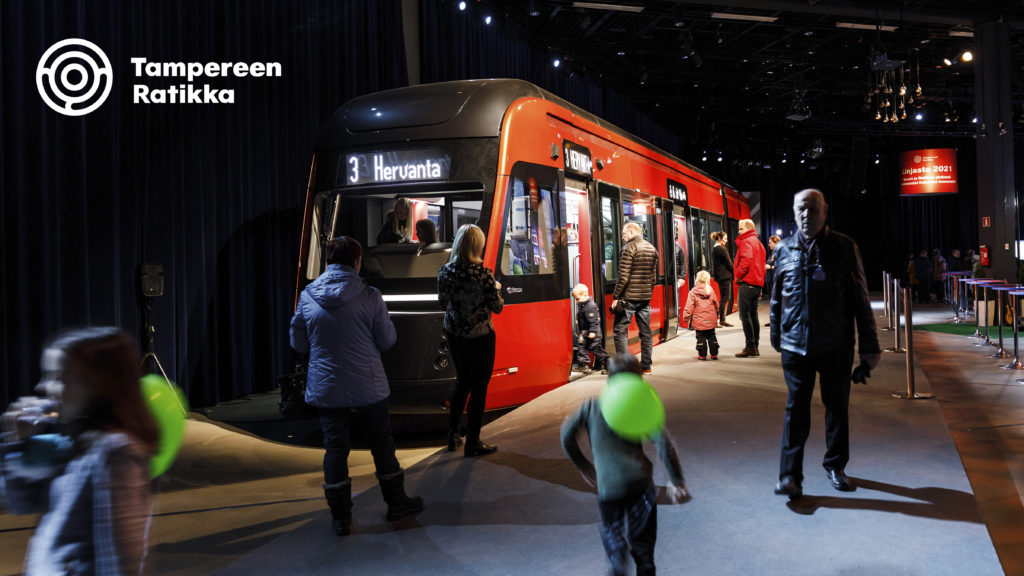 The study implemented by IROResearch asked 500 Tampere residents for their opinion on the tramway. The respondents were quota sampled for place of residence, gender and age group in order to provide the best possible representation of Tampere’s population. A total of 61% of respondents agreed completely or somewhat with the statement “The tramway will make Tampere a better place to live”. The corresponding figure in 2017 was 54%. Some 17% of respondents were undecided while 16% disagreed completely with the statement.

– Tampere Tramway is a topic that people are interested in and talking about, and it can be seen and heard everywhere. Generally speaking, attitudes are more positive now than in autumn 2017. We will once again utilise the results of the study in tramway development work and communications. Research provides us with valuable feedback about, for example, the kind of information people want to receive about the tramway now and what expectations and hopes they have concerning the tramway, says CEO Pekka Sirviö from Tampere Tramway Ltd.

The number of respondents with a very negative attitude was 8% in 2019, down from the previous level of 10%. Respondents who were neutral felt that the tramway would not affect their lives in any way. Some people in this group also believed that additional investments in bus traffic would have been sufficient. Respondents with a negative attitude considered the tramway too expensive, and this group also felt that investing in the development of electric cars bus traffic would have been sufficient.

Temporary disturbances caused by the construction project are acceptable

Respondents in the consumer study accept the fact that the tramway construction project causes some temporary disturbances. A total of 80% of respondents (77% in 2017) felt this way. However, the study showed that half of the respondents spent less time in the city centre because of the construction work. The corresponding figure in 2017 was 44%. According to the study, 69% of respondents believe the tramway will improve the vitality of Tampere city centre. This figure was the same in 2017. A total of 62% (59% in 2017) felt that the tramway would benefit local entrepreneurs.

– The results of the study show that city residents are confident that the tramway will have a positive impact on vitality in the city centre. Of course, the study also shows that the city centre worksite is a burden on local residents right now. Completion of the Tuulensuu area on the western side of downtown Tampere at the end of the summer will make the end result more concrete, and hopefully restore people’s faith in the progress of the construction process. At this time, the construction project period has passed the halfway point and 56% of the work has already been completed, states Sirviö.

– Downtown entrepreneurs and operators have done a great job of organising new block events to brighten up the city. The city and tramway will be involved in arranging more events as the construction work is completed on each block. Access to all business locations during construction work has also been ensured, so we encourage everyone to use local services, says Sirviö.

The study also examined the travel frequency of Tampere residents on the future tramway. According to the study, 69% of residents believe that they will use Tampere Tramway at least a few times per month. The corresponding figure in 2017 was 57%. The 2019 study revealed that 5% of respondents felt they would never use the tramway in comparison to 8% in the previous study. The tramway’s appeal could also be seen among car drivers, with 41% of that group estimating that the tramway would increase their use of public transport. The size of the group that favours using a car has decreased, and their attitude towards the tramway has become more positive.

Tram cars perceived as suitable for the cityscape

The most important changes in comparison to the previous study

The most significant changes in comparison to the 2017 study were:

The study was carried out by IROResearch Oy in April 2019 and it was commissioned by Tampere Tramway Ltd. The target group was Tampere residents aged 15–75. The sample size was 500 respondents and they were quota sampled for place of residence, gender and age group. The data was collected by means of computer-aided telephone interviews on 10–23 April 2019 at IROResearch Oy’s own telephone interview centre.