Tampere is building a tramway, and Hämeenkatu will undergo a complete makeover at the same time. The Tramway Alliance is rebuilding the sidewalks, underground municipal engineering and street lighting in conjunction with the tramway work. Tuulensuu – the first tramway block on our main street – was completed in June. A celebration to mark the completed section of street will be held in the Tuulensuu area from noon to 4 pm on Saturday 24 August. The family-oriented event is free of charge. 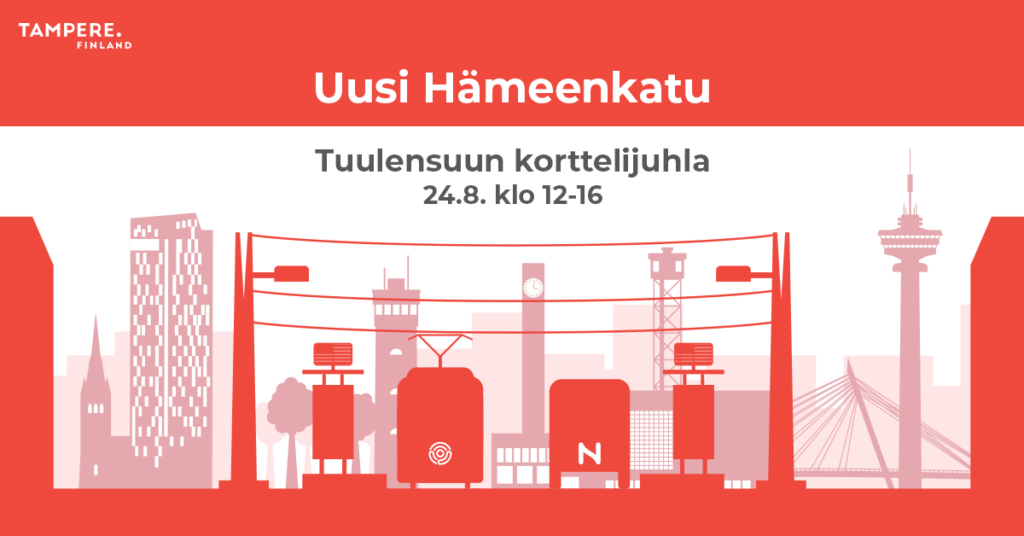 The Tuulensuu block party will give the public an opportunity to enjoy unique offers from businesses located in the area, music, activities for children and a great late-summer atmosphere. The event will also provide information about how tramway construction work is progressing and the Tramway era that will begin in Tampere in 2021.

– Construction of the tramway is progressing according to plan, within the target schedule and on budget. The construction work has sparked a lot of reactions among Tampere residents, and use of services in the city centre has decreased somewhat because of the work. We believe that it’s time to celebrate now that the first section of Hämeenkatu is ready, explains Antti Haukka, a project manager in the City of Tampere’s Tramway Development Programme.

– Completion of the block has had a positive impact on the atmosphere in our store, and the number of customers is starting to grow as well. I think celebrating the completion of construction work with an event for everyone is a great idea, says Erika Hilden, who owns the Hilden store.

Two other block events will be arranged this year in honour of Hämeenkatu’s makeover.

– We’ll be arranging similar events later this year as other street sections are finished. We’ll be contacting businesses and residents in those blocks to provide more information about the block parties at a later time, promises Haukka.

Responsibility for arranging the festivities lies with the City of Tampere’s Tramway Development Programme in cooperation with Tampere Tramway Ltd and the Tramway Alliance. The events are being produced with the Tampere Tunnetuksi ry (Promoting Tampere Association), Nem Agency and Pirfest ry (Tampere Region Festivals).

– We were really excited about the challenge of creating an event concept for the new Hämeenkatu block parties, says Managing Director Rowan Rafferty from Nem Agency.

– We’re really looking forward to the Tramway era. That why we contacted Tampere Tramway Ltd about our desire to implement an event concept in the tram cars or at stops during the construction phase or after traffic begins. We were delighted with the chance to be involved in the block parties. The programme for the first block party will be produced by the World of Tango festival, explains Tiina Kuusisto, Executive Director of Pirfest ry.