In a public vote on tram car colour, the red option received 13,867 votes, which was 59% of all votes. The other colour option – light blue – received 9,711 votes and placed second in the vote. This result means that the Tampere cityscape will have a red tramway starting in 2021. A total of 23,578 votes were submitted during a public vote held in conjunction with the Tampere Day event weekend. 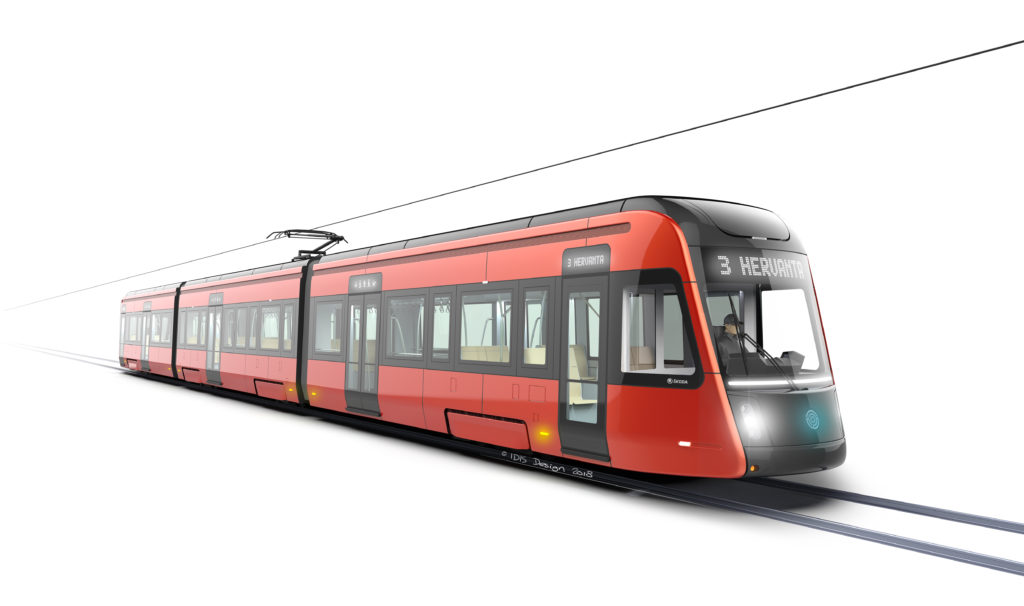 The colour of the tram car will be officially announced on the same day that Tampere celebrates its 239th anniversary. The facade of Tampere City Hall will be lit up in red all day on Monday to honour the decision on tram car colour and mark the city’s anniversary. A large outdoor screen showing the red tramline moving along Hämeenkatu will also be set up at the Central Square on Monday.

– Detailed design of the interior parts of the tram car is taking place this autumn. At the beginning of the year, Tampere residents will once again be able to participate in tram car design by evaluating the seat fabric options for the passenger compartment. At the same time, they can also tour a full-scale model (Maketti) of the real tram car, says CEO Pekka Sirviö from Tampere Tramline Ltd.

A vote on the tram car colour was held at the Tramway booths set up in conjunction with Tampere Day celebrations on Saturday and Sunday 29–30 September. People were also able to vote online from 9 am on Saturday until 9 pm on Sunday. The two finalist colours were selected last spring on the basis of an open colour evaluation. These two colours stood out as equal favourites in the initial colour evaluation.

Tram car design has been guided by the principles of simplicity and functionality. As a result, the colour surfaces are very clear and there is plenty of space for the main colour. Metallic paint will be used on the tram car to make the colour tone more vibrant. In addition to red as the main colour, a greyish black metallic paint will be used in the tram car. Metallic paint surfaces reflect the environment and change depending on the amount of light and shadow.

In the future, the city may also have tram cars that are taped to reflect different themes along with the standard red version. The current plans call for two theme trams in the fleet, one reserved for tramline art and the other for city events.

The first tram car will be completed in 2020

The Tampere tram car will have a smooth, streamlined and functional appearance. Bright LED lights used in the tram car will help to distinguish it from other traffic. The LED warning lights along the bottom of the windscreen create a strong contrast to the dark background and improve its visibility. The line display at the front end, which shows the terminal point of the route and line number, will also be implemented using LED lights. The vertical LED light strips on the inner edges of the door leaves light up when the car stops and the lights will move on both sides of the entrance when the doors open. Outlining the door opening with light increases visibility at the door area. The interior lights in the bright passenger compartment adjust according to the time of day.

Tampere’s tram cars will be manufactured by the domestic company Transtech Oy, which is 100% owned by Skoda Transportation. A total of 19 tram cars have been ordered for Tampere. The three-section, bi-directional ForCity Smart Artic X34 tram cars are 37.3 metres long. The tram car is equipped with a low floor in all areas, and it is accessible by wheelchair and with children’s prams. Each tram car has 104 seats and space for 264 passengers during rush hour. Manufacturing of the tram cars will begin at the Otanmäki plant in Kajaani in 2019. The first tram car is scheduled for completion in early 2020, and tramway traffic in Tampere will begin in 2021.