Tampere Tramway comes to Hämeenkatu and Pyynikintori for the first time 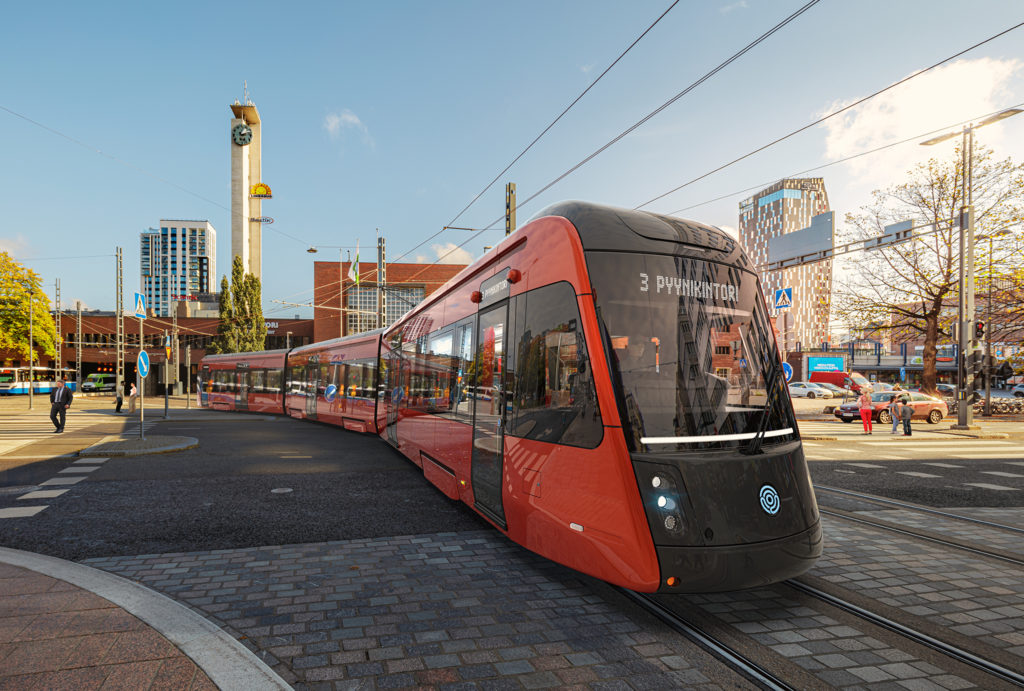 You can spot the Tampere tram car on Hämeenkatu for the first time on Sunday 15 November 2020. The illustration was created for Tampere Tramway Ltd by Idis Design Oy and Skyfox.

Next Sunday will be a historic moment for Tampere as test runs for the Tampere Tramway come to the city’s main street for the first time ever. The tram car will begin by moving slowly – at a speed of around 5 km per hour – on Hämeenkatu and Pirkankatu and traffic controller will be present to ensure traffic safety. The test runs will start on Sunday in order to minimise the disturbance to other traffic.

– Now that we’re coming to the city centre, it’s a good time to remind people about traffic safety. The traffic environment on Hämeenkatu and Pirkankatu has changed since completion of the tramway. The streets now have tram crossings and crosswalks, states Project Engineer Niina Uolamo from Tampere Tramway Ltd.

Trams and car traffic must yield at crosswalks, most of which are controlled by lights on Hämeenkatu and Pirkankatu. In this new situation, there are no crosswalk markings at the tram crossings, many of which are located where crosswalks used to be. Pedestrians and cyclists must yield at these crossings.

– It’s a good idea for everyone to review the new traffic rules before actual tram operations begin. The Tampere Tramway website has a lot of information about tramway traffic rules and traffic safety, suggests Uolamo.

Testing of track infrastructure and cars will continue all winter

During the first test runs on Hämeenkatu and Pirkankatu, the functionality of the entire track and its technical systems will be comprehensively tested. The Tramway Alliance will test the driveability of the tracks, turnouts and overhead contact lines as well as the visibility of traffic signs, traffic lights and signals, intersections and crosswalks. Other work will include adjusting traffic lights as well as testing the permitted operating speed and turnout control.

The tram car will be driven at walking speed, after which the speed will gradually be increased. In the future, test runs at the tram’s operating speed will be done on the entire section and on all tramway streets. The maximum speed is 20 km/hour on Hämeenkatu and 40 km/hour on Pirkankatu.

– In addition to test runs performed with one car in the city centre, we’ll be doing test runs with two cars on the entire section between the depot and Pyynikintori. Those tests are intended to check the reach of the cars’ exterior elements and the functioning of traffic and warning lights. During the test runs involving two cars, traffic controllers will have to temporarily halt traffic. Later in the winter, we’ll also be performing test runs with several cars operating simultaneously, explains Project Engineer Petra Brunnila from the Tramway Alliance.

On weekdays, the aim is to perform test runs outside rush hour, but transfers from the depot to the test run area may also take place during rush hour. The tram car is already a familiar sight, particularly in Hervanta and on Hervannan valtaväylä, and it moves smoothly among other traffic. Test runs and tram car tests will continue throughout the winter in different conditions.

– The progress of the test runs and more detailed schedules depend on the success of the tests. That means some changes are possible. We hope that tram watchers will remember to be patient and cautious in traffic. It’s also important to maintain the required physical distances in this coronavirus era, notes Uolamo.

Up-to-date information about the progress of the test runs is available from Tampere Tramway Ltd and Tramway Alliance channels.

Make sure you understand the traffic rules for a tramway city

The test runs will cause some detours in bus routes on Sunday. The bus stops on Hämeenkatu will not be in use between 10 am and 2 pm on Sunday 15 November during the test runs. More detailed information about changes in public transport is available at Tampere Region Public Transport (Nysse).

Signs will also be put up in the area to remind people about the ongoing test runs. The tram car will travel along the section between the depot and Itsenäisyydenkatu underpass according to traffic rules, so traffic controllers will not be present there on Sunday or Monday.

The Tampere Tramway traffic safety website contains plenty of general information about the tramway traffic rules as well as diagrams for vehicle traffic, pedestrians and cyclists. The website also has many animations to provide guidance concerning traffic rules.

Maintenance work on Hämeenkatu and Pirkankatu began with washing the track grooves and the street. During the night between Monday and Tuesday, the rail and line drains were flushed and washed and the turnouts were lubricated.

Traffic light tests will be performed in the area on Tuesday, also using a Unimog, which is a special work machine that moves on the tracks. Grinding of the rails will take place at the end of the week and, for example, turnout operation will be tested. Signs about the upcoming test runs will also be installed.

– We perform night work between approximately 10 pm and 6 am, while daytime work takes place between 8 am and 4 pm. Maintenance work can cause a certain amount of noise, mostly from the pressuring washing equipment. During rail grinding work, we drive from one end of the work area to the other so the disturbances are short. However, we have to drive past some properties several times, so we apologise for any inconvenience that this might cause. We hope that residents and road users will understand and exercise caution, says Project Manager Santeri Heinonkoski from the Maintenance Alliance.