Another important milestone in the Tampere Tramway story was reached on 23 May when the first Tampere tram car arrived in the city. Tampere Tramway’s tram cars are being manufactured at Škoda Transtech Oy’s Otanmäki factory in Kajaani. Europe’s most modern tram car will move outside the depot for the first time during test runs scheduled to start around the end of June. 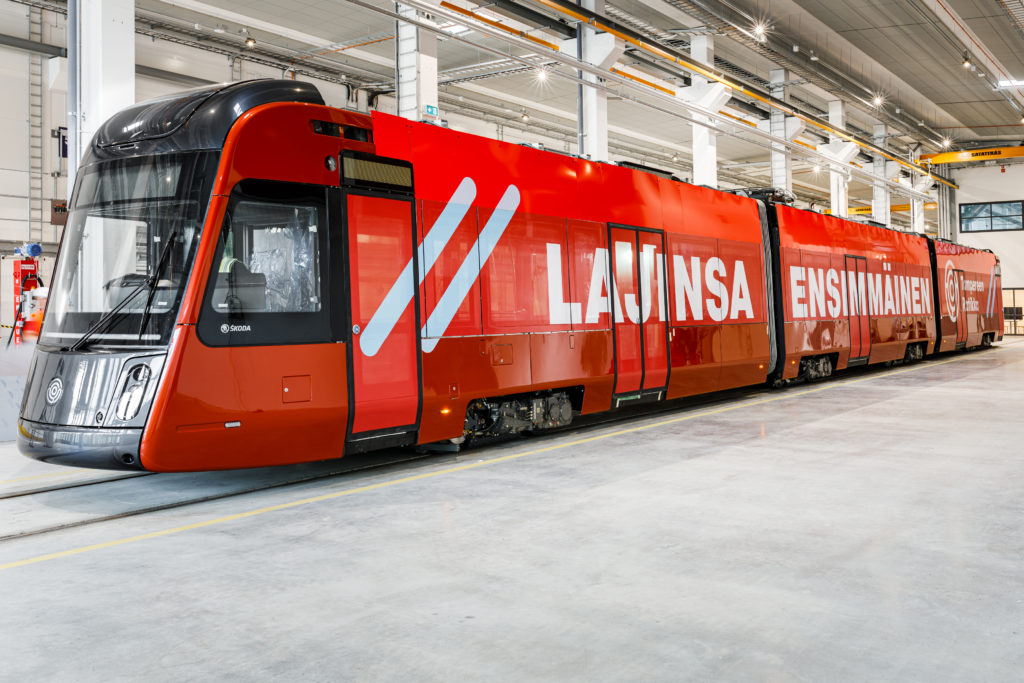 Tampere’s tram car is accessible, spacious, air conditioned and specially designed for northern conditions. The tram car is 37.3 metres long, 3.6 metres high and 2.65 metres wide, and it weighs 56.8 tons without passengers. Tampere’s tram car is the largest ever manufactured in the Nordic countries. In addition to its size and features, the car is special because it was designed in cooperation with Tampere residents.

– During the spring of 2018, we made many trips to Oulu in order to evaluate a model of the tram car with user groups from Tampere. The final model of this version – known as a mock-up – was displayed at the Mock-up Exhibition held at Tampere Hall in early 2019 and elsewhere in Tampere since then. We’ve received feedback from participants concerning the user experience that we then forwarded to the manufacturer for consideration in tram car functionality. For example, that feedback led to modifications in the interior decoration and related solutions. The vibrant brick-red colour of our tram car was also selected by means of public voting, says Rolling Stock Manager Ali Huttunen from Tampere Tramway Ltd.

The decision to build the tramway was made in November 2016 in Tampere and construction work started in early 2017. Since then the project has remained on schedule and on budget, and many important milestones have been reached – some of them ahead of schedule. The spring and early summer of 2020 have in many ways been historic in terms of Tampere’s tramway project.

– We began testing the tramline infrastructure in March with a used test car imported from Germany. The first tramline tracks were laid three years ago in the Hervanta district of Tampere, and a few days before the first tram car arrived all 15 kilometres of Tampere Tramway’s double track had been installed. Training for Tampere Tramway’s future traffic controllers began in early May and recruiting of 65 tram drivers began on 2 June. We’re right on schedule to start traffic in August of next year, lists CEO Pekka Sirviö from Tampere Tramway Ltd.

Since commissioning of this tram car will only be completed in Tampere, the first car is unfinished in many ways. It is still missing some exterior equipment and, for example, the interior decorating materials.

– Škoda Transtech Oy is pleased to be able to deliver the very first ForCity Smart Artic tram car manufactured for the City of Tampere. The car being handed over to Tampere Tramway Ltd today is a logical continuation of the 73 Artic tram cars already delivered to Helsinki and Germany. Our Otanmäki factory doesn’t have a test track suitable for Tampere’s car, so any tram car testing that requires movement on the track has to be performed in Tampere. It makes sense to install some of the upholstery elements only after commissioning of the electrical devices so they aren’t in the way when people are making measurements and adjustments, says CEO Juha Vierros from Škoda Transtech Oy.

Tampere’s tram car is the first light rail car manufactured by Škoda Transtech Oy. In cooperation with its parent company, Škoda Transtech Oy is manufacturing tram cars for Helsinki and Tampere as well as for the German cities of Mannheim and Schöneiche, which is near Berlin.

– So far, we’ve sold nearly 200 Finnish Artic tram cars. Export of the Artic tram cars marks a major milestone for the Finnish railway and technology industry. We want to thank Tampere Tramway Ltd and the Tramway Alliance for the great cooperation and at the same time we officially hand over the first car to the company, continues Vierros.

People in Tampere will be able to admire the fully-equipped tram car in September, when the second car arrives.

– If permitted by the coronavirus situation, we’ll be organising an event in late autumn where people can get a close-up view of the fully-equipped tram car and the depot, says Pekka Sirviö.

Test runs will start in the depot in late June

The very first Tampere tram car will be seen outside the depot in late June-early July when test runs begin between the depot and Turtola.

– The actual test runs will begin at the depot in week 26, when we start testing the tramline system and performing prototype car tests. Our goal is to begin test runs on the street network in week 27, says Project Engineer Niina Uolamo from Tampere Tramway Ltd.

The test runs will check the driveability of the tracks, turnouts and overhead contact lines as well as the visibility of traffic signs, traffic lights and signals, intersections and crosswalks. Other work will include adjusting traffic and warning lights, performing power supply load tests as well as testing the permitted operating speed and turnout control. The first set of test runs will be performed continuously during weeks 26–28. This will be followed by type tests on the car. The schedule for this will be confirmed at the end of June.

In September, the test runs will move to the section between Turtola and the Itsenäisyydenkatu underpass, with the tram car moving to Pyynikintori Square at the end of this year. The first passengers will be testing the tramway next spring, and traffic according to the regular timetables will begin on 9 August 2021.

From July onwards, the Tramway will be a permanent part of Tampere’s traffic – the delivery of additional tram cars begins in the autumn and a total of 19 cars will be operating in the city next summer.

– We hope that all road users will familiarise themselves with the traffic rules for the Tramway era. We’ll be reminding Tampere residents of this in cooperation with the City of Tampere and Tampere Public Transport (Nysse). For example, a comprehensive information package on the Tampere Tramway traffic safety contains more information. Every person is responsible for following the traffic rules. Let’s all stay alert in traffic, concludes Sirviö.