Testing of Tampere’s tramway track and tramline system with the test car will begin at the tram car depot on 16 March. The aim is to perform the first test runs with the test car outside the depot on Hermiankatu on Wednesday 18 March. If necessary, the tests will continue until the end of April. A tram car that was manufactured in 1981 and brought to Tampere from Germany will be used in the testing. Traffic controllers will ensure the test car’s passage among other traffic, but now is also a good time for Tampere residents to review the traffic rules that apply to a city with a tramway. Here comes the tram!

People will be able to travel on Tampere Tramway for the first time in April 2021, with the actual transportation beginning in August of the same year. However, Tampere residents will already have the chance to start learning how to co-exist with the tramway when the test car begins operating in Hervanta.

– We always strive to meet customer expectations in the best possible way. In terms of effective testing to ensure the quality of Tampere’s first tram car and the infrastructure, delivery of the durable TW6000-model tram car to Tampere was an opportunity that benefited all project parties. The car type now being delivered to Tampere Tramway Ltd is very similar to Tampere’s future Artic tram cars with regard to its technical specifications. We’re very satisfied that Tampere Tramway agrees with us about the benefits of procuring the test car, says Juha Vierros, CEO of Škoda Transtech Oy.

During the testing, signs posted in the test run area will inform people that the test car is operating, and traffic controllers will be present to ensure safe passage of the test car among other traffic. The test car will also be taped with Tampere Tramway’s safety colours of red and yellow. In addition, Tampere Tramway Ltd will produce traffic safety material for distribution to, for example, schools and daycare centres in the area. However, each person’s attention and awareness of the traffic rules will also play a key role.

– The safety of people moving around near the track and the safety of the entire tramline system is of utmost importance to us. The tram car is a new element in the Tampere cityscape and that’s why we hope city residents will pay special attention to reviewing the traffic rules at this time, when test runs are being performed, notes Sirviö.

Test runs and testing ensures the functionality of track infrastructure

Before the test runs, the test car will be equipped and its exterior dimensions modified so that it sufficiently corresponds to the dimensions of the Tampere Tramway cars. This will make it possible to check the compatibility of the car with platform areas as well as the reach of its exterior elements near various fixed structures. The test car will also be loaded with approximately 18,000 kg of extra weight so that it is similar in weight to the future tram cars. The test runs will involve testing the drivability of the track and turnouts with a car of the proper weight in addition to ensuring the functionality of track-related systems and electrified line structures.

– The electrified line system will be tested to ensure that pantograph contact with the overhead contact line is maintained in the turnout areas and during line operation, explains Project Manager Sari Valjus from the Tramway Alliance.

Other focuses during track infrastructure testing include right of way operations related to traffic lights, checking track signal functions and traffic sign locations as well as testing the operation of the turnout control system. At the depot, testing will cover interlocking device operations, the placement of depot track pathways, as well as turnouts, signals and electrified line functions.

Speed tests will be performed in stages on different streets

Tests related to all tramline systems will be performed on the track section between the tram car depot in Hervanta and the Turtola tram stop. On each test section, the car will first move at walking speed, which means a maximum of 5 km/hour. The speed tests will be performed according to the maximum speeds for each street or track. These are 30 km/h on Hermiankatu, 15 km/h on Atomipolku, 30 km/h on Insinöörinkatu and 70 km/h on Hervannan valtaväylä. Traffic controllers will be present during the tests, and they will temporarily stop vehicle traffic and direct pedestrians and cyclists if necessary.

– The maximum speed tests on the track must be performed continuously on each street or section, which is why traffic control will be used. If a test run on a planned section is interrupted, it must be repeated again almost immediately. A test run on a single section of street lasts for a few minutes at a time, so the interruptions in other traffic will be short, says Project Engineer Petra Brunnila from the Tramway Alliance.

Test runs will be performed outside rush hour periods, which means between 9 am and 3 pm. During the speed tests on Insinöörinkatu, bus line 3 will take detour to Teekkarinkatu-Hervannan valtaväylä for a one-day period. The stops on Hervannan valtaväylä will be in use. Line 32 will run on its normal route during the test runs.

Preliminary schedules for the test runs:

Smooth traffic means cooperation. Taking other people into consideration and observing rules leads to smooth traffic. The arrival of the tramway is a good reason to improve cooperation.

– All of us Tampere residents have room for improvement in terms of situational speeds, using blinkers, and observing the rules at traffic lights and crosswalks, lists Traffic Engineer Heljä Aarnikko from the City of Tampere.

The test runs will give Tampere residents a great opportunity to learn about moving in city traffic during the Tramway era. The old traffic rules still apply, but the tram car will bring some new elements that people in Tampere didn’t need to consider earlier. 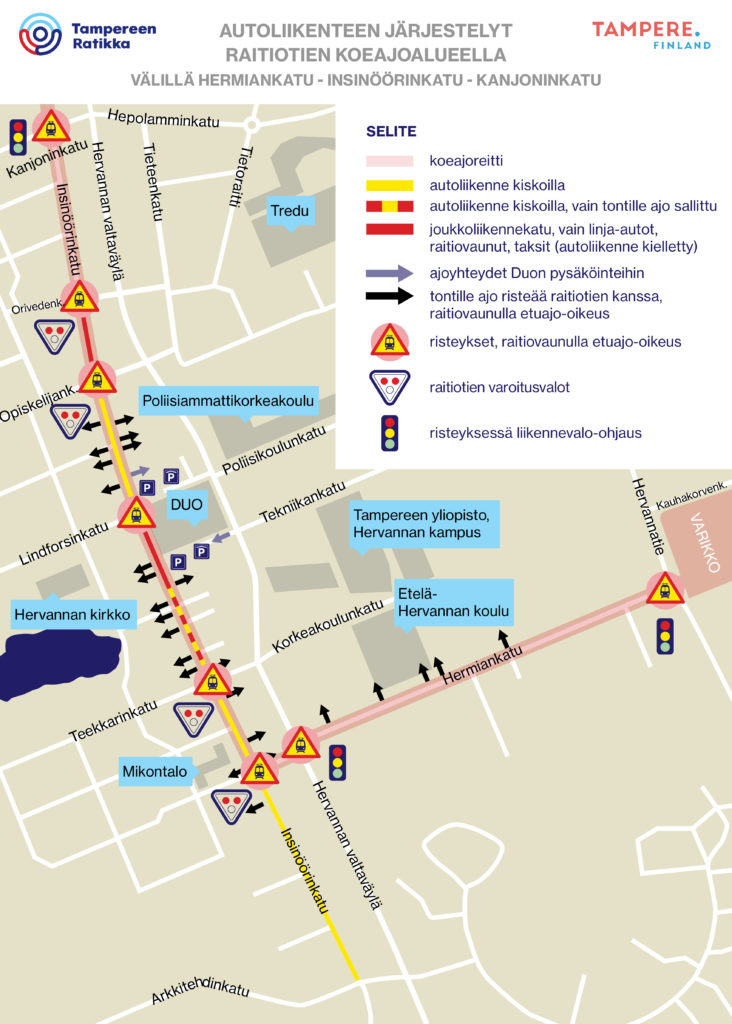 A signal that displays a rapidly flashing yellow light tells road users to be especially cautious. When a solid yellow light goes on for 3-5 seconds, cars should stop if this can be done safely.

– At this point, the tram is already very close and a solid yellow light should not be considered permission to drive through a crossing, says Aarnikko as a reminder.

Cars must never enter an intersection when two red lights begin flashing because that’s when the tram is coming. After the tram has passed, the tram traffic light will flash yellow for a few seconds and then the lights will go off and traffic can continue according to the normal rules.

The tram at an equal intersection

The tram has right of way at an equal intersection, so drivers should get used to also looking to the left when arriving at an intersection. In Hervanta, the corner of Lindforsinkatu and Insinöörinkatu is this type of intersection.

In accordance with its name, a public transport corridor is a place where buses, the tram and taxis can drive. Driving for service purposes and driving into yards is only permitted when indicated by an additional panel.

Drivers should use the routes recommended for passenger cars when, for example, driving into Duo Shopping Centre. It’s a good idea to get used to driving into the shopping centre parking hall and parking lot via Hervannan valtaväylä. 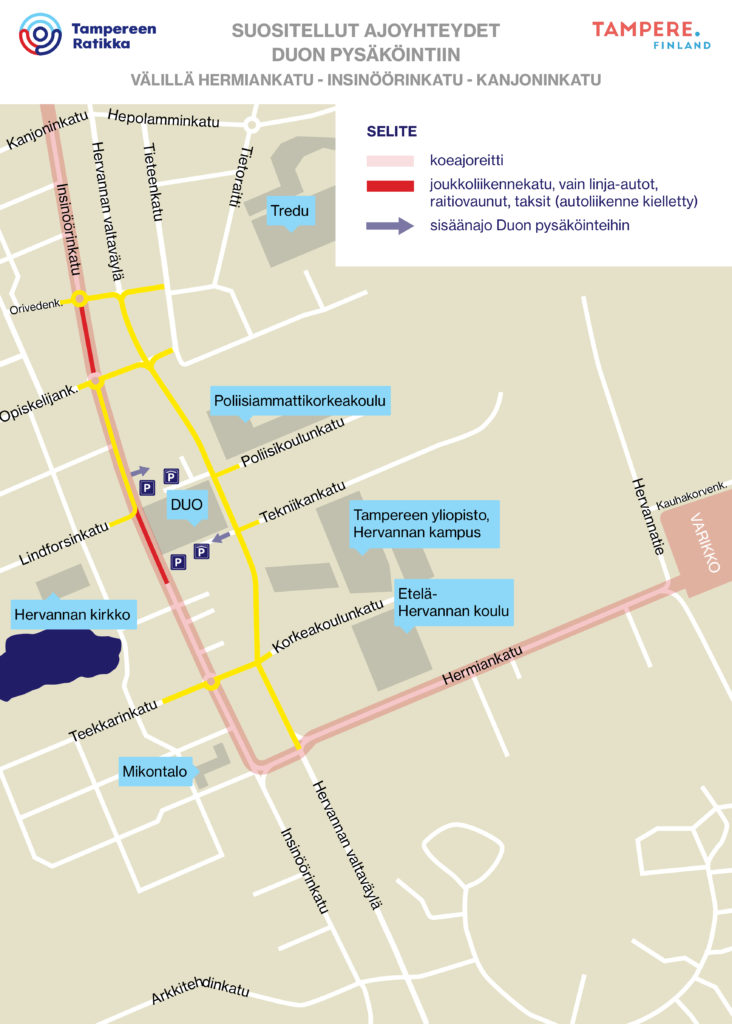 A level crossing is a place where the track can be crossed, but you must always yield to the tram. There is a crosswalk painted over the street but not over the tracks in these places. Check the markings so you know when you are entering a crosswalk. In Hervanta, there are level crossings on Hermiankatu.

The tram will yield to you at a crosswalk, but remember to always look both ways to make sure it’s safe to cross the track. The Tampere tram is a quiet mode of transport and it cannot stop suddenly. Remember that lingering on the track is forbidden.

Cars and the tram will be using the same lane in many parts of Tampere. If there are parking places on the edge of the lane, be careful when you park to ensure that the tram can get by.

When turning your vehicle across the tram tracks, you must yield to a tram car coming from behind you, which means the same direction as you are driving. You must also yield to a tram car approaching from the other direction when it turns to the left, in other words, in front of you even if you’re driving straight ahead.

If the tram car has a yield sign or STOP sign, it will yield to traffic approaching from both directions. Exceptions to this rule are intersections equipped with tram traffic lights and traffic circles, where you must yield to the tram when indicated by the lights.

Information about the trams: