Tampere is holding a Tramway Celebration on Sunday 8 August 2021 – Nearly 200 businesses will participate in the Tramway Week preceding the start of traffic.

NOTE. The event in Jugendtori Square has been canceled due to the coronavirus situation. The event will be held online! *** Traffic on Tampere Tramway begins on 9 August 2021. Tampere will be marking the start of tramway traffic with the Tramway Week and Tramway Celebration. The Tramway Celebration will be held at the Jugendtori Square on 8 August from 12 noon until 1:30 pm. The event is free of charge. The start of tramway traffic has inspired companies along the tramline to create a festive atmosphere throughout the entire week of 2–8 August preceding the start of traffic. At this time, a total of 181 companies are already participating in Tramway Week! 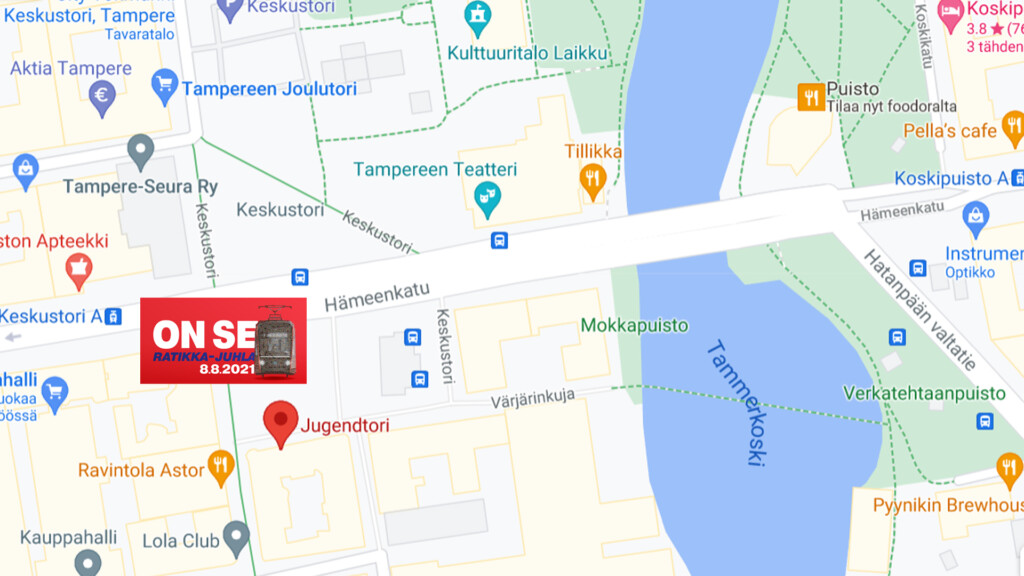 The Tramway Celebration will be held at the Jugendtori Square on 8 August from 12 noon until 1:30 pm.

Tampere is welcoming the start of the tramway era with a Tramway Celebration on 8 August, which will be preceded by Tramway Week. Tampere Tramway Ltd and the City of Tampere are organising the Tramway Celebration, which will be held at the Jugendtori Square. Performers at the event include Diandra, Noora Louhimo Duo and Takomo, and a song from TTT-Theatre’s Matilda musical will also be seen on the stage. Prime Minister Sanna Marin and the Mayor of Tampere Lauri Lyly will speak at the event. The Tramway Celebration will be hosted by Sean Ricks, and many tramway builders will also appear on stage. Of course, the Tramway itself will also have a role in the event.

The Tramway Celebration will be held according to the valid coronavirus restrictions. You can also watch a live broadcast of the event via the Tampere Tramway website at http://live.tampereenratikka.fi/.

The start of the tramway era inspires businesses

The City of Tampere, Tampere Tramway Ltd and Tampere Tunnetuksi ry (Promoting Tampere Association) have invited all businesses located along the tramline to participate in Tramway Week as part of the countdown to the tramway era. Tampere will be celebrating Tramway Week from Monday to Sunday during the week of 2–8 August.

The companies are participating in Tramway Week with tramway-themed decorations and a wide variety of promotional offers. These offers will be all be listed in the Tampere Tunnetuksi Pass, which is available via the Tampere Finland application. You can download the application free of charge from app stores. Some of the businesses are also organising their own programme during Tramway Week. The promotional offers will be visible on the Tampere Tunnetuksi Pass during the event week, and the programme will be published next week on the Tramway Week website at https://www.tampereenratikka.fi/ratikka-viikko-ja-ratikka-juhla/ratikka-viikko/ (only in Finnish).