The first fully-equipped tram car arrived in Tampere late in the evening on Saturday 12 September. Its arrival marked a major milestone in Tampere Tramway’s journey towards the start of traffic, because the car has been tested and received type-approval. This means testing of the next cars manufactured as serial production will proceed much faster. At this time, you can find out more about the car by watching this video (the video is also available at the end of this article). 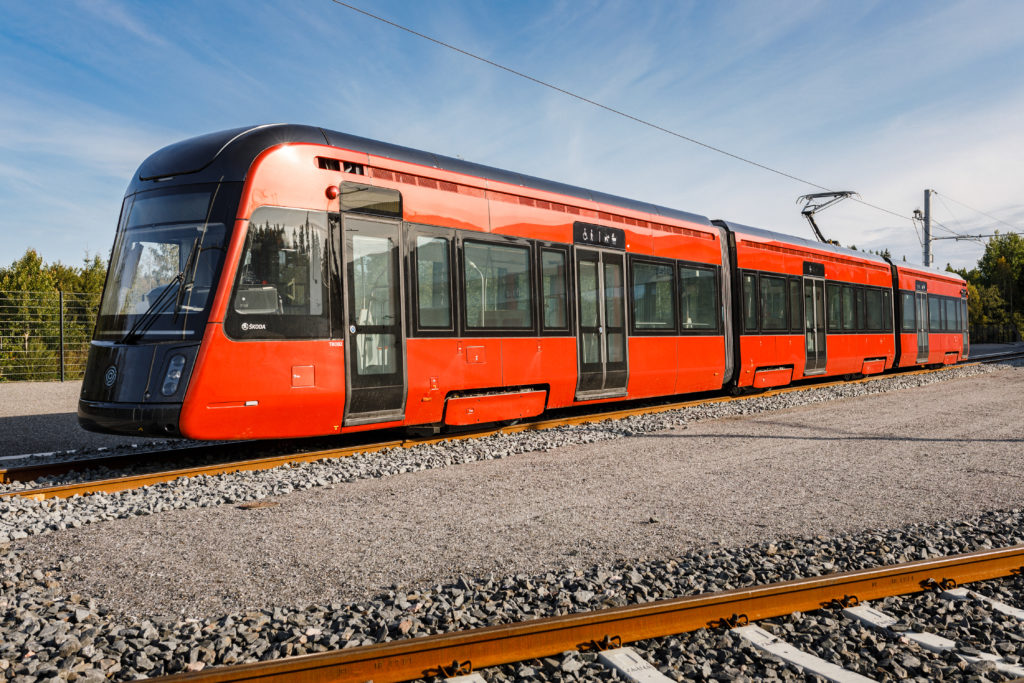 Tampere Tramway’s ForCity Smart Artic tram cars are being manufactured at Škoda Transtech Oy’s Otanmäki factory in Kajaani. The very first Tampere tram car arrived in Tampere in May. Since its commissioning was only completed in Tampere, that first car was unfinished in many ways. It was still missing some exterior equipment and, for example, the interior decorating materials. Tampere received its first fully-equipped tram car in mid-September. Tampere Tramway Ltd originally planned to introduce the car to the public at the beginning of October as part of Tampere Day celebrations, but that event had to be cancelled due to the coronavirus situation. At this time, you can find out more about the car by watching a video. An event is also tentatively scheduled for later this year.

Right from the start, an important element in tram car design has been taking the requests and improvement proposals of Tampere residents into consideration.

– Tampere residents were able to vote on the colour of the car and the fabric designer. During the spring of 2018, we also made many trips to Oulu in order to evaluate a preliminary model of the tram car with user groups from Tampere. The final model of this version – known as a mock-up – was available for viewing for the first time at the Mock-up Exhibition held at Tampere Hall in early 2019. More than 15,000 visitors attended the exhibition over a 6-day period. Development work continued with the mock-up and various user groups during 2019. It’s such a pleasure to be able to reveal the results of that cooperation, which is Tampere’s very first fully-equipped tram car, says a delighted Pekka Sirviö, CEO of Tampere Tramway Ltd.

Tampere’s tram car is the largest ever manufactured in the Nordic countries. It’s accessible, spacious, air conditioned and specially designed for northern conditions. The tram car is 37.3 metres long, 3.6 metres high and 2.65 metres wide, and it weighs 56.8 tons without passengers.

– We’re proud to be able to deliver Tampere’s first fully-equipped Artic tram car. Tampere’s tram car is part of the Artic tram car product family, and it’s the longest and widest member of the family. We developed the first Artic tram car for Helsinki in the early 2010s. Our objective at that time was to design and build a tram car that provides passengers with a reliable, comfortable and modern transport experience. Now – in 2020 – we’ve sold more than 200 Artic tram cars and there’s no end in sight for this success story. Our company has also been recognised internationally as a manufacturer of durable and high-quality tram cars. More than 40% of the cars we produce are exported. We believe that Tampere’s Artic car type will attract great interest in the central European market, states CEO Juha Vierros from Škoda Transtech Oy.

The car will be on display for the first time this week during test runs in the depot area, and it will be a regular sight on the line later this autumn.

The maximum capacity of the Tampere tram car is 264 passengers, and it has 104 seats. Each car can accommodate 12 children’s prams or 6 large wheelchairs and 6 bicycles. The car also has 4 seats designated for people travelling with a guide dog. The floor of the car is at the same level as the tram stop platforms and it has no stairs, which makes it accessible and easy to get in to.

– Our goal has been to make travelling by tram as pleasant and safe as possible. The cars are spacious and air conditioned and the lighting was designed to take the amount of outdoor light as well as different times of day and seasons into account. The railings and handles are positioned so that passengers of different sizes can reach them. The passenger compartment has no sharp edges. People with impaired vision have been taken into consideration by means of tactile paving stones at the stops and guidance strips on the floor of the car. The cars also have camera surveillance, so the driver can monitor what’s happening in the tram cars, explains Rolling Stock Manager Ali Huttunen from Tampere Tramway Ltd.

The tram car’s steady ride also helps to increase safety. Since the tram car remains in its own lane for most of the journey, the speed remains steady because other traffic does not affect it.

– The tram travels at about 20 km/hour in the city area, which contributes to a safe journey. The highest permitted speed is 70 km/hour, and that applies to Hervannan valtaväylä, continues Huttunen.

In terms of size and colour, Tampere’s tram cars are very noticeable. The car’s visibility – especially in poor conditions – is ultimately created with lights. Each car has a strip of LED warning lights along the bottom of the windscreen and a strongly lighted route plate at the top. They create a strong contrast against the dark background of the front end of the tram. The driving lights are highly visible LED lights. The shape of the front end and placement of the bumper have also been designed to be as safe as possible.

– The tram car’s modern design and lighting solutions were the result of cooperation between Tampere Tramway Ltd, Idis Design Oy and user groups. They stand out positively from mainstream tram cars. Our engineers wanted to create beautiful structures that are also functional. Now that the second car is ready for delivery, we can breathe easy, says Juha Vierros.

– For example, the car’s interior cameras can be used to count passengers, which will provide public transport planners with valuable information related to managing rush hour traffic. In the future, this information will also be beneficial for passengers when we’re able to apply it so that a person travelling with a bicycle can find out in advance whether a car has space for bikes. The energy created when a tram car brakes will also be used to heat the car during the cold season, explains Huttunen.

Pirkanmaa on the fabric, literary art on the windows

Art is a part of Tampere Tramway in many ways via the Tramway Art project. Tramway art has been visible in the Tampere cityscape during construction, and now permanent works of art have been completed along the tram route, for example, on the tram bridge across Kekkosentie and the support wall in Turtola. A diverse range of tram stop art will be revealed once the tramway begins operating. Passengers in tram cars will also be able to enjoy art.

The pattern created by Laura Gröndahl, who was selected to design fabrics for Tampere Tramway, is now on display for the first time on the seats of the fully-equipped car. Gröndahl earned a degree in fashion design from Metropolia University of Applied Sciences and she has mainly worked as a pattern designer since then. Her patterns have been used by companies like Nanso, Vimma, H&M and Zara. The search for a fabric designer began with an open portfolio application in autumn 2018. The designer was selected by a combination of a public vote held in conjunction with the Mock-up Exhibition and jury voting. 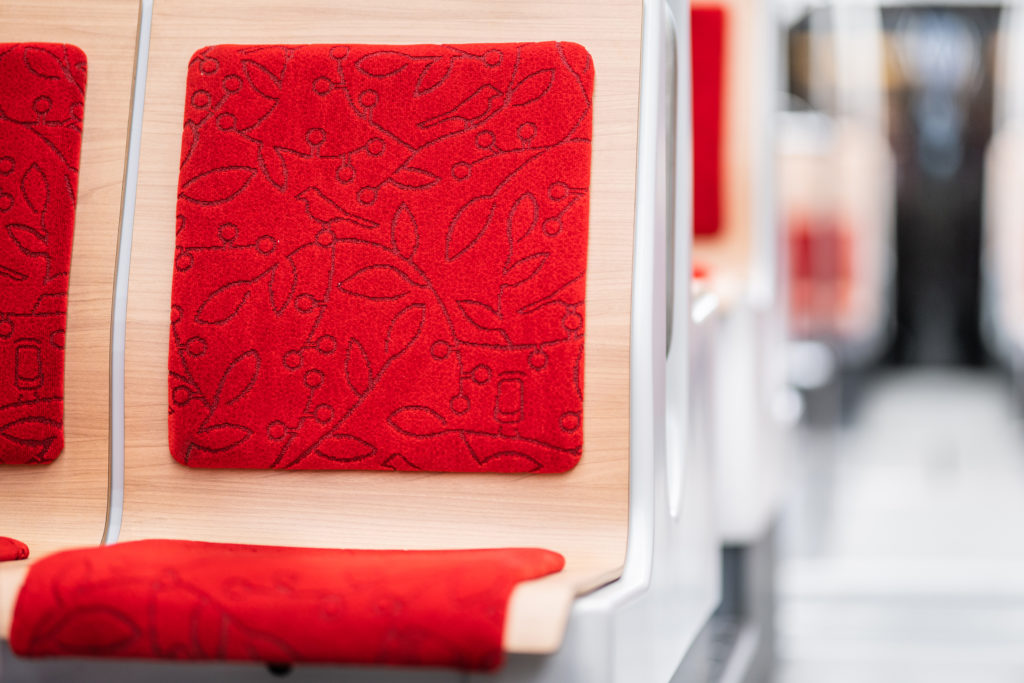 – It’s been a great honour to create the pattern for Tampere Tramway. I wanted to use local images as the subject matter, and that’s why the pattern includes the regional bird and regional flower of Pirkanmaa and, of course, Tampere’s brand-new tramway. My aim was to design a fresh and timeless pattern that will also delight passengers for years to come, explains Laura Gröndahl.

Passengers will have plenty to keep them entertained during their journey when they take a closer look at the edges of the tram car windows.

– Passengers can read lines from works by Kirsi Kunnas, Jari Mäkipää, Salla Simukka, Lukas Jokilehto, Pekka Kytömäki and Milja Niemi that are printed on the windows. The texts are written in the Hervanta font designed by Emil Bertell, says Heini Orell from Frei Zimmer Oy, which is coordinating the Tramway art.