Tampere Tramway’s first test runs in the Kaleva and Tammela area met all expectations.  All tests on the tram car, track and various technical systems proceeded as planned. The tram’s arrival in Kaleva and Tammela attracted a large crowd, which applauded the testing team from balconies and street level. Test runs will continue in late autumn on Hämeenkatu and Pirkankatu in the city centre. 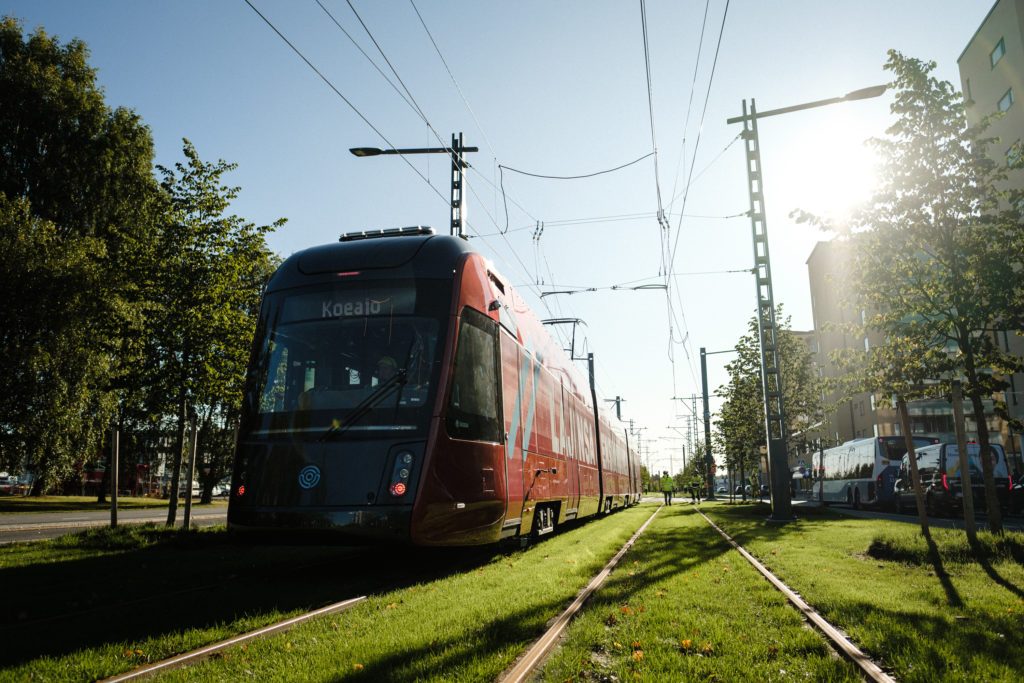 The first test runs in the area between Turtola and Tammela were performed on 14–17 September. These runs tested the following track sections: Hervannan valtaväylä (starting in Turtola)-Rieväkatu-Sammonkatu-Itsenäisyydenkatu until the railway station tunnel and Teiskontie until Kaupinkatu.

– The most important targets in these test runs were to examine driveability of the track and tram car positioning on the rails as well as functioning of the electrified track’s overhead contact wire at different locations, says Project Engineer and Test Run Coordinator Niina Uolamo from Tampere Tramway Ltd.

One particularly interesting site in this test run section was the Sammonaukio turnout area, where the car was moved several times and in different directions. Test runs must check the turnouts with regard to all driving directions, tracks, turnout control and traffic lights. As a result, the testing team includes experts from many different fields. The driver, on the other hand, concentrates on areas such as the field of vision and functionality of traffic lights and signals.

– We managed to deal with all these areas successfully. Traffic light control throughout the test run area will be checked once again and fine-tuned to make traffic as smooth as possible for everyone. We apologise for the delays this will cause to other traffic in Sammonaukio, but this work will ensure that the lights function well when the streets are busy. 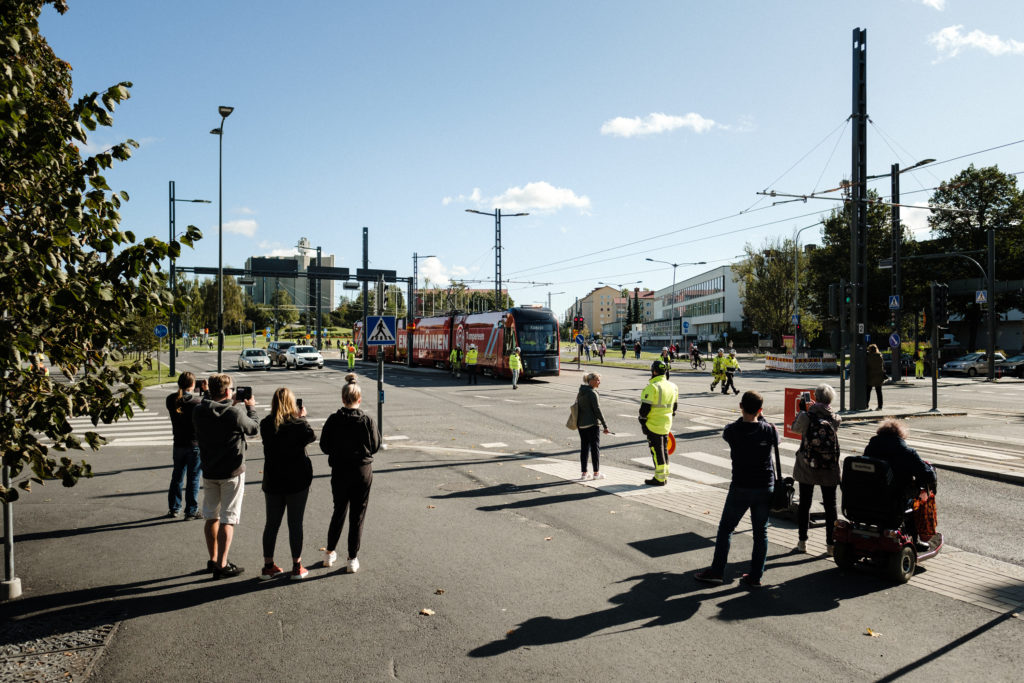 The tram car’s arrival in the city centre attracted a large crowd of interested onlookers.

–  The atmosphere was just amazing and we saw a lot of happy faces. We also heard some applause and people were apparently celebrating the event in their homes in different ways. Thanks again to the audience for giving us a great reception and especially for letting the testing team do its work despite all the interest, says a grateful Uolamo.

The first tests on Monday 14 September were performed at walking speed. On Tuesday, the test runs were already taking place at the tram’s normal operating speed, which means the maximum speed was 60 km/hour between Turtola and Rieväkatu. The operating speed on Sammonkatu and Teiskontie is 40 km/hour.

– Our traffic controllers were involved on the first days to ensure good traffic flow and the actual test runs were scheduled outside rush hour. In the future, transfers from the depot to the city centre can also take place during rush hour, and in that case the traffic rules and light signals in the tramway area will be observed. 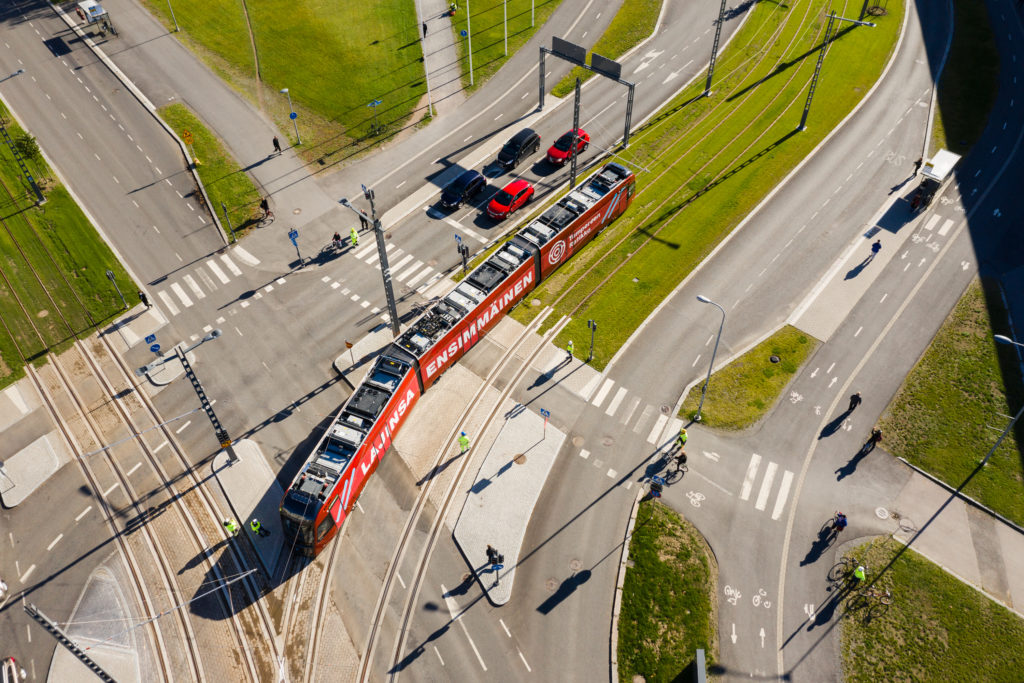 In addition to a second tram car that arrived last weekend, Tampere will be receiving more new cars this autumn. Later on, we’ll have several cars in test run traffic. The next test runs are scheduled for November, when the testing area will move to Hämeenkatu and Pirkankatu.

– During the test runs, we noticed a number of pedestrians and cyclists who went through red lights. Some drivers also failed to obey the traffic lights and a few also ended up on the tramline tracks, which is always a dangerous situation. I believe that this was unintentional, and we will be paying more attention to the road traffic markings at these locations. It’s a good idea to review the traffic rules for the Tramway city and keep them in mind, encourages Niina Uolamo.

Tampere Tramway Ltd, the City of Tampere and Tampere Region Public Transport (Nysse) have cooperated to produce a lot of different traffic safety material, which you can find at www.tampereenratikka.fi/en/traffic-safety/. This section of the website contains general information about traffic rules and diagrams concerning the arrangements for vehicle traffic, light traffic and pedestrians. Animations provide further guidance regarding the tramway traffic rules.