Starting on 15 March, trams will be moving for the first time in the Tampere University Hospital area in Kaleva and between Insinöörinkatu and Makkarajärvenkatu in Hervanta. Testing of the tramway system will last until 26 March in these areas, and tests will be performed with several cars simultaneously. At the same time, Tampere Tramway’s test and training runs will continue in areas taken into use earlier. They are currently being performed on weekdays between approximately 8 am and 4 pm. The driving days will lengthen during the spring until traffic begins in August. 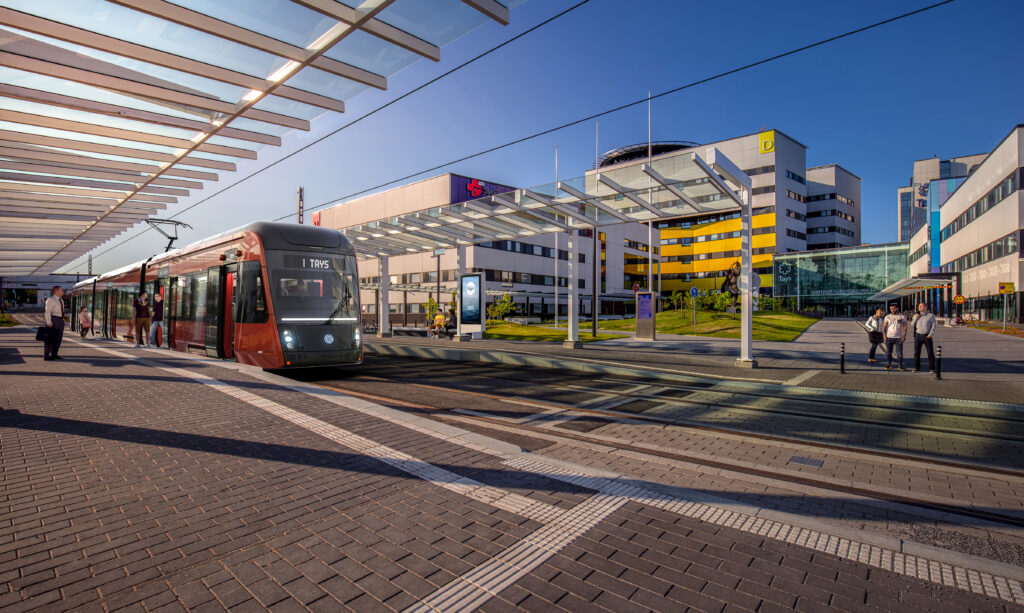 On Monday 15 November, Tampere Tramway’s test runs will start in the Tampere University Hospital area in Etelä-Hervanta to Makkarajärvenkatu.

– Starting test runs in two new areas represents another major milestone in the Tampere Tramway era. After that, we will only have Hatanpään valtatie and the commissioning and test runs on line 1 before traffic begins, explains Pekka Sirviö, CEO of Tampere Tramway Ltd.

The tram car will begin by moving slowly – at a speed of around 5 km per hour – in the test run areas, and traffic controllers will be present to ensure safety. Test runs at the tram’s operating speed will be done on Tuesday 16 March. The speed during these runs will vary between 20 and 40 km/h.

– The tram will once again be moving in new areas, which is a good reason to remind people about traffic safety. These track sections have a lot of intersections, so anyone living and operating along the route should review the tramway traffic rules, says Project Engineer Niina Uolamo from Tampere Tramway Ltd.

– People need to be alert at intersections and driveways, and it’s a good idea to become familiar with the operating principles of tramway traffic lights on the Tampere Tramway website, continues Uolamo.

The test runs in the new areas will start with comprehensive testing of functionality for the entire track and its technical systems. The Tramway Alliance will test the driveability of the tracks, turnouts and overhead contact lines during the test runs. At the same time, the visibility of traffic signs, traffic lights and signals, intersections and crosswalks will be assessed. Other work will include adjusting traffic lights as well as testing the permitted operating speed and turnout control.

The tram car will be driven at walking speed, after which the speed will gradually be increased. Test runs at the tram’s operating speed will be done as soon as the track infrastructure has been verified as functional at slower speeds.

– The test runs will start with tests conducted with a single tram car that initially moves at walking speed. We will also perform test runs with two cars, primarily to check the reach of the car’s exterior elements and the functioning of traffic and warning lights, says Project Engineer Petra Brunnila from the Tramway Alliance.

The aim is to perform test runs outside rush hour, but transfers from the depot to the test run area may also take place during rush hour. The tramway is already a familiar sight to Tampere residents and a part of normal traffic. Training runs and tram car tests will continue in different conditions throughout the spring.

– The progress of the test runs and more detailed schedules always depend on the success of the tests. That means some changes are possible. We hope that tram watchers will remember to be patient and cautious in traffic. It’s important for everyone to maintain the necessary safety distances to the tramway and, during this coronavirus era, also to other people, says Niina Uolamo as a reminder.

After completion of track infrastructure tests, Tampere Tramway’s car tests and training runs will enter the Tampere University Hospital and Etelä-Hervanta areas. This is expected to take place around week 14.

The Tampere Tramway website has plenty of general information about the tramway traffic rules as well as diagrams for vehicle traffic, pedestrians and cyclists. The website also has many animations to provide guidance concerning traffic rules.

Tampere Tramway will take people to services and workplace clusters

Tampere University Hospital is one of the largest workplace and public service clusters in Pirkanmaa region. One of the key goals during tramway planning and municipal decision-making was to ensure that the tramway meets the hospital’s traffic needs in the first implementation phase. This will become reality in August, when traffic between Tampere University Hospital and Hatanpään valtatie begins at the same time as operations start on the Pyynikintori–Hervanta line. Construction work on Hatanpään valtatie will be completed ahead of schedule, which means that traffic on the entire Section 1 will start on 9 August.

– Being able to commission the entire tramway network at the same time as the new bus lines take effect is great news for passengers. This will also make it easier to plan traffic and finalise services, states CEO Pekka Sirviö from Tampere Tramway Ltd.

Some parts of Tampere’s tramway project are ahead of schedule, and the entire system is on schedule in terms of commissioning.

– It’s been wonderful to see how smoothly our journey towards starting traffic has progressed. The coronavirus situation is a challenge for the whole world, and we’re grateful that it hasn’t slowed our activities so far. However, in cooperation with the Traffic Alliance, we have to carefully consider what is the best time to begin open trial traffic for passengers. A decision and a separate announcement about that issue will be made soon, continues Sirviö.

Information about traffic arrangements in the test run areas is available at: https://www.tampereenratikka.fi/en/traffic-safety/