On 15 November, a historic step was taken in Tampere Tramway test runs when a tram car was driven along Hämeenkatu to Pyynikintori for the very first time. Test runs in the city centre have progressed as expected. The test runs are a diverse entity that involves testing the tramway system and the new tram cars. Training runs for traffic controllers will also begin on 2 December. Development of the practical service experience can start in January, when test runs begin with test passengers. In addition to the tram cars becoming a permanent part of Tampere’s traffic system, maintenance equipment will also be a regular sight on the tracks. The tramway has changed Tampere’s traffic environment and that’s why it’s important to learn new operating methods in traffic. 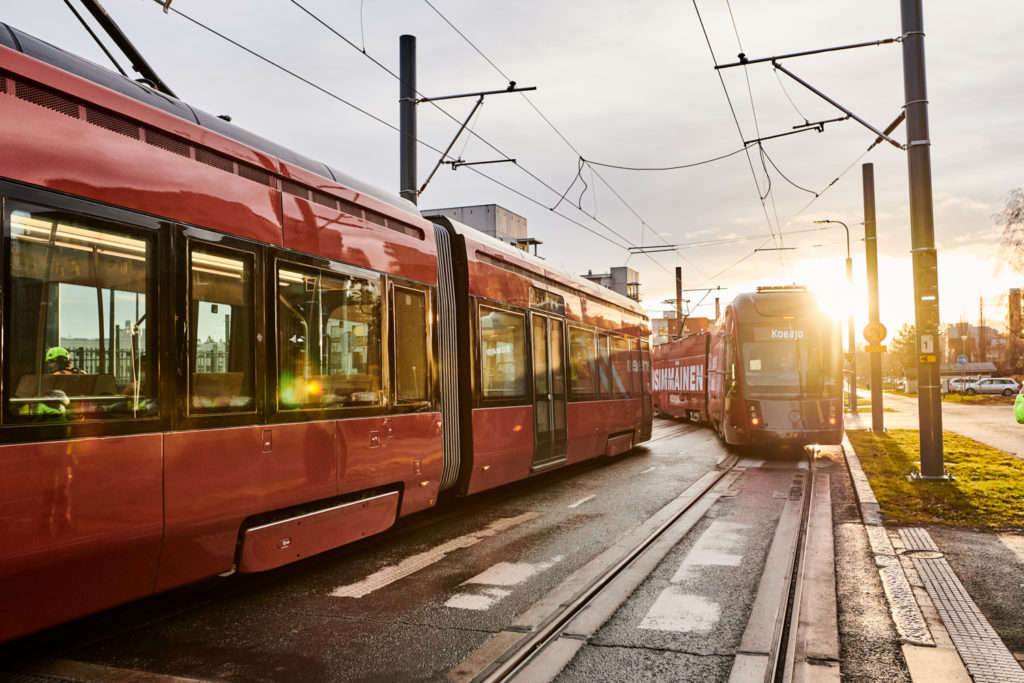 Traffic on Tampere Tramway will begin on 9 August 2021. Before that day, many phases in commissioning of the tramway system and tram cars will be completed to ensure smooth traffic in the future. The test runs will continue until traffic begins and maintenance equipment on the tracks will also become a familiar sight to people moving around in Tampere.

Smooth traffic is a matter of cooperation that involves taking other people into consideration and following the rules. The arrival of the tramway is a good reason to improve cooperation.

– During the test runs, we’ve noticed that car drivers occasionally end up in track areas reserved for the tramway even though traffic signs and curbs direct traffic to new lanes. When driving, people need to be alert with regard to signs and it’s also a good idea to review the traffic rules for the tramway era, says Project Engineer Niina Uolamo from Tampere Tramway Ltd.

Pedestrians and cyclists are also facing a new situation due to changes made to the crosswalks. Construction of the tramway also means that Tampere has a completely renewed Hämeenkatu.

– Hämeenkatu now has a lot of tram crossings and crosswalks with different obligations to yield, states Uolamo.

Trams and car traffic must yield at all crosswalks, most of which are controlled by lights. However, there are no crosswalk markings at the tram crossings, many of which are located where crosswalks used to be. Pedestrians and cyclists must yield whenever they cross the road outside a crosswalk.

– When moving near the tramway route, people should make sure they know the new transport practices and the joint rules that apply to traffic. The continuing test runs mean that the tramway will be a part of daily life for Tampere residents even before regular traffic begins in August. This is why it’s important to become familiar with the traffic rules immediately.

The tramway as part of daily traffic

The test runs on Hämeenkatu and Pirkankatu that began in mid-November comprehensively tested the functionality of the track and its technical systems. Test runs with two cars were also performed on the entire section between the depot and Pyynikintori. Those tests were especially intended to check the reach of the cars’ exterior elements and the functioning of traffic and warning lights. Test runs involving more than one car will continue throughout the winter.

– The test runs didn’t reveal any major surprises, so we were able to completely test compatibility between the track infrastructure and car, summarises Niina Uolamo.

Test runs will continue with tram car tests during the winter. Next spring, test runs will begin on the Tampere University Hospital line from Teiskontie via Tekunkatu and Kuntokatu to Lääkärintie and in Hervanta, from Atomipolku to the Hervantajärvi end stop.

Traffic controllers and tram car drivers get down to work

On the second day of December, VR – which is responsible for operating Tampere Tramway – will be able to start test runs that will train the tramway’s traffic controllers for their profession. For example, VR will perform test runs that check the functionality of the planned driving times and timetables and the performance and timing of various tasks that are part of a work shift.

– We’re very excited about starting work, which means driving the tram, even though this will begin slowly with small-scale training and test runs. We’ll mainly be driving during the daytime between 8 am and 4 pm. Next spring, we’ll also be doing test runs in the evenings and on weekends. The number of cars used in the test runs will vary depending on the test being performed, says Operative Manager Vesa Rauhala, who is the person responsible for Tampere Tramway at VR.

The tramway’s service activities will also be tested with different user groups during the test runs. The first test passengers will travel on the tram in January. Tampere Tramway will be part of the Nysse public transport system, and Nysse is responsible for recruiting the test passengers. The application period for test passengers is open until 6 December at www.nysse.fi/nysselab. Test passengers who belong to special groups are being recruited via the City of Tampere’s equality coordinator.

In addition to test runs and tests, VR will train approximately 65 tram car drivers during the spring. Drivers from the first course will start the practical stage of their driver training in early February, after which teaching runs will be increasingly visible in the Tampere cityscape. By the summer, all of the drivers will be in action and all 19 tram cars will have arrived in Tampere.

People moving along the tramway route should be aware that maintenance equipment will also be moving on the tracks. Tampere Tramway’s Maintenance Alliance is responsible for ensuring that the tramway can operate safely and according to plan.

Tramway maintenance work will be done around the clock. Work that would interfere with daytime traffic will be performed at night.